Interesting fact — in the Anglican church you actually get ordained twice. The first is as a deacon, and then about a year later you get the full ordination as a priest.

There are a number of routes to becoming an Anglican priest, depending upon your past experience, education and involvement with the church. I’m figuring Ignatius did the full three-year diploma at Wycliffe College at the University of Toronto, mostly because it’s the one I’m most familiar with, and it’s a really nice campus.

As for the police — had the van been parked on the east side of Duffering it would have fallen under the jurisdiction of 14 division, but its location puts it on the very edge of 11. 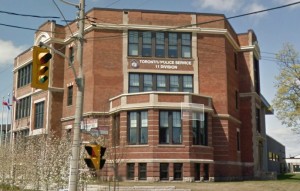 And last, but not least — Kim Basinger.